It has been an interesting year for San Jose Bike Party.  With all our test rides, pre-rides and other special events on top of SJBP, we rode 136 times in 2016.  All together after our 111 SJBP’s these past 9 years, we have ridden more than 3 million collective miles since our inception.

We began 2016 with our 100th SJBP ride.   This was a great time for us to reflect on the past and think about our founders and how SJBP came to be.  February brought us the Superhero ride, and March brought us the Pajama Ride.  April was the Disney Character ride, and also began our test rides for our annual Bike the Limits 100-mile ride.  We also partnered with San Jose City Councilmember Raul Peralez for the Great American cleanup event again, and with our Ravens and other volunteers cleaned up Watson Park and surrounding areas.

May was a huge month for SJBP as well as all local biking clubs.  In addition to our Purple Formal SJBP Ride, we had our Bike the Limits annual 100 mike ride, Bike Party to Work Day, SJKBP Disney Character Ride, Groovin’ on a Sunday Afternoon, and we also partnered with other local advocates to start San Jose’s own Ride of Silence to commemorate riders who have lost their lives.

June’s ride theme was changed to the Sharks theme when our beloved local hockey team made the Stanley Cup playoffs.  July brought us the SJBP Independence ride, as well as our participation in the Rose White & Blue Parade whose theme this year was “Bicycles”, and our Groovin on Independence Day ride afterwards.  Our annual Ladies Ride was also held in July and was a big hit once again.  We have even more planned for our Ladies in 2017!

August brought us the Summer of Love ride as well as a PoKeMoN Go themed Kidz Ride.  September was another big month with our third Rave Ride, as well as our participation leading the Hero and SJBP Kidz Rides at Viva CalleSJ 2016.  October brought us the Oktoberfest ride, and in November we ventured North to Palo Alto for the Outer Space Ride, and had our first Groovin’ on Black Friday ride in District One with San Jose City Councilmember Chappie Jones.

December closed out the year with our third Ugly sweater ride, and our fourth annual Holiday Kidz ride in Willow Glenn that has grown well beyond our expectations.  Stay tuned in 2017 for some revisions there based on the growing popularity of this event!

We also became a 501(c)(3) Public Charity this year.   We went through this process to formalize our organization to allow us to receive donations and grant funding to enhance our activities.    So far we have received approximately $5000 in monies and services grants/donations that have allowed us to provide portable toilets as well as to fund our new #LightMeUp Program.

We formed the #LightMeUp program late in 2015 and it took off in 2016.  This program started after the tragic loss of yet another one of our riders.   We felt that putting lights on bikes of at risk riders in San Jose was the best way we could help to prevent future tragedies, so we started the #LightMe Up Program.  We have received over $3000 in funding to date for this program from donations collected from our riders, as well as grants from The Awesome Foundation of San Jose, San Jose District 3 City Councilmember Raul Peralez, and District 1 Councilmember Chappie Jones.  Through these generous donations, we have given away more than 1800 lights so far.

We also partnered with Silicon Valley Bicycle Coalition on a variety of events this year.  In May, we worked closely with them on coordinating events for San Jose’s “Bike Month”.  In October, we worked together to create the Bike to the Bay ride with the office of The President of the Santa Clara County Board of Supervisors, Dave Cortese.

We hope that you enjoyed riding with us in 2016 and look forward to riding with you in the future!  Remember… San Jose Bike Party is EVERY 3rd Friday, Rain or Shine. 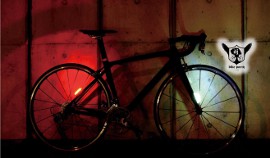