You are here: Home / 2014 / Dance Tribe and Bike Party People – Step Up to Help a San Jose Community Asset 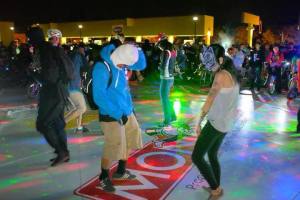 Many of you, oh Bike Party faithful, told us just how much you loved regrouping in Discovery Meadow and especially dancing on the world’s largest permanent outdoor Monopoly® board. With that fresh in your mind please realize that the board and the surrounding area are maintained not through city funds, but through community funds and the non-profit Friends of San Jose.

Just like San Jose Bike Party, Monopoly® in the Park is provided to the people of San Jose through the hard work of volunteers. But the organization is also badly in need of funds to replace tables, benches, and other equipment that is aging or in many cases have been severely vandalized. While we were dancing the night away on Friday, Friends of San Jose had just kicked off their Kickstarter campaign to raise funds for new equipment. 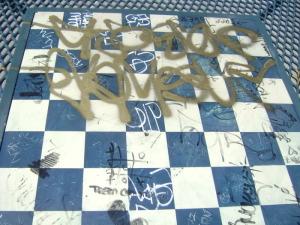 We can do better than this. Won’t you help?

Won’t you help? Show the community that Bike Partiers know how to have fun, but also give back when it counts. Watch the video below and then visit the Kickstarter page to give $10, $20, or more and receive a gift from the group.

Help them reach their goal of $1,200. The campaign ends on Friday, November 14th. Let’s show them that with San Jose Bike Party’s help we can help them not only make their goal but surpass it. Whaddya say. Let’s do this.