You are here: Home / 2014 / Everyone loves the Sharks. Now introducing the San Jose Ravens.

Everyone loves the Sharks. Now introducing the San Jose Ravens.

Everybody loves the San Jose Sharks, right? They have become an integral part of the San Jose and downtown scene. Well now, get ready as we officially introduce the San Jose Ravens. Although the Ravens were given their first Bike Party test run during the “Dia de los Muertos” ride in October, we are proud to officially welcome them to the Bike Party world this weekend during the Great American Cleanup celebration.

Our fleet of litter eaters will hit the streets on Saturday morning picking up garbage near the Arena Green and that evening will be involved with the ceremonial coin toss at Buck Shaw Stadium in Santa Clara, when the San Jose Earthquakes take on Chivas USA.

While the Sharks game involves a puck, the Raven’s game is all about trash. Yes trash. We remove the trash on San Jose streets so you don’t have to look at it. Let’s go back a bit and see how this all started.

If you’ve ever been to a San Jose Bike Party ride you’ve seen the San Jose Bike Party BIRDs, those helpful riders sporting the BIRD flags on their bike or body. Their job is to make sure you have a good time, while giving directions or directing you to the correct route.

Well the Ravens are a ornithological offshoot of the BIRDs. Just like real ravens they sort through the discards left by others. They volunteer their time to make Bike Party rides clean and green and also perform acts of cleanliness all over San Jose cleaning up parks, streets, and dirty parking lots.

Our fleet of eight Raven bikes were custom built for the streets of San Jose by De Redding Bike Builders in Koudekerk aan den Rijn, Holland. Bike Party Laboratories sent standard San Jose City Recycle Carts off by container ship to Holland so that a custom fit locking system could be integrated onto each bike (see video above). On arrival to San Jose, Bike Party mechanic crews began putting each of the bikes together. The bikes are actually tricycles with a forward two wheel axle system that carries the weight of the recyclables.

Modeled after typical Dutch municipal cleaning bikes the front end also includes a space on each side to carry a litter stick, dust pan and broom, and a bicycle floor pump. An onboard cabinet includes the following: 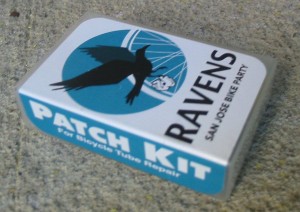 As you can tell from the list of essentials carried on the bikes, Raven bikes also act as ride concierge, on call bicycle repair platforms, hydration stations, as well as a mobile trash container. The raven crew have become quite popular on monthly rides. With the ability to pedal very slowly and make tight corners (see video above), ride participants have responded very positively with a growing list each month of volunteers hoping to ride the unusual bikes.

Want to follow the Ravens on the next ride or need to get your bike back on the road during the ride? Download the app and follow the group !SanJoseBikeParty or check this link here.

Ravens in the Media 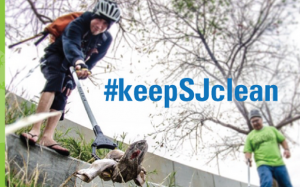